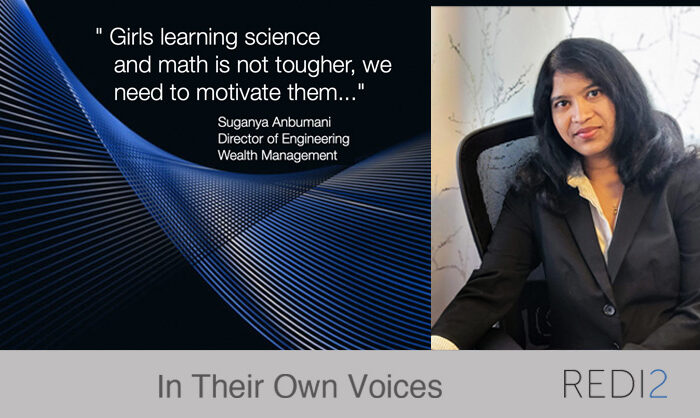 In Their Voices: Suganya Anbumani

Suganya came to Redi2 more than five years ago as Director of Engineering, Wealth Management. She was recruited to the company by Tom Huddleston, Redi2’s CIO and Managing Director. The two had worked together at another company and Tom was familiar with Suganya’s talent, work ethic, and passion.

“When I was looking for someone who could run our Wealth Management development team, I knew I needed a person with the technical chops, an understanding of managed accounts, and most importantly, a can-do attitude. Suganya was number one on my list and I am so happy she decided to join us at Redi2.”

Suganya’s interest in software engineering was sparked in the small village in India where she grew up. She credits her mother for opening her eyes to the possibilities for women beyond her village and for pushing her to build a professional career, but it was her own interests that pushed her toward computer science.

The path wasn’t always easy for Suganya, especially as a teenager but, beginning with her first experience at a computer lab as a young girl, she found her overall focus early and sometimes relied on her mother’s support to help keep her on track. “Back then, computers were getting popular among kids, and I knew I wanted to be a software engineer,” she said.

Suganya graduated from Periyar University with a degree in Computer Science Engineering and started her career in India, she moved to the Boston area in 2010 when she got married. At each stop, Suganya relished handling even bigger challenges—and she’s had no shortage of them. She’s a hard worker by all accounts but she prides herself on being a smart worker. “Smart work is the most important and being flexible and listening to others are the biggest qualities I focus on,” she said.

Since 2010, she has been involved in the mortgage industry, cloud computing, financial services trading infrastructures, asset management companies, and other financial projects before joining Redi2—where she could put all her previous experience to work.

“I grew in each of my positions. I knew how the financial services industry worked and how the different companies within it worked, so Redi2 was a perfect fit,” she said.

Suganya is purposeful and intentional in her work; and she loves her role as a mentor for others on her team at Redi2. She, in fact, had many good mentors in her career and she wishes to be a good mentor in return to everyone on her team.

However, she is thoughtful about her career and what she might have done differently. The one thing that stands out, she says, is finding her voice, which she wishes she had done sooner. Like many women, particularly within the Indian culture, she held back.

“I used to be afraid to speak up because I thought I might be wrong,” she said. Over the years, mentors urged her to embrace her talents and communicate her value. At Redi2, she found her voice and is no longer afraid to be heard. “It’s the culture here, they give you a lot of freedom and they trust and support you like I’ve never seen before in my career.”

The future of women in tech

Despite the skeptics she’s met along her career path, Suganya is optimistic about the future for women in tech. The industry has evolved so women can more readily find starting jobs in the industry. And they can climb the ladder, too, both because the industry increasingly understands the value they bring as technology experts and managers, as well as on the shoulders of the women who’ve pioneered leading tech roles. “Most people in the industry are very welcoming if you have the background and work ethic for the job,” she said.

“On the education side, I think more can be done. Women and girls still think STEM (Science, Technology, Engineering, Mathematics) is harder for women. I don’t know where that comes from. Girls learning science and math is not tougher, we need to motivate them, so they have confidence from childhood.”

While many women in all types of professions worry about work-life balance, Suganya makes no apologies for her strong work ethic—even when that means pulling an all-nighter.

“My husband, he is everything. He supports me every day. He is also in tech, so he understands, if there is a production-related issue, hey no excuses. If I don’t get out of my seat for two days, he’s there to take care of the kids, to take care of me.”

Outside of work, Suganya says computers are her biggest hobby, but she enjoys the outdoors and reading books—reading about new technology is a favorite.

Must Read Blogs for Financial Advisors