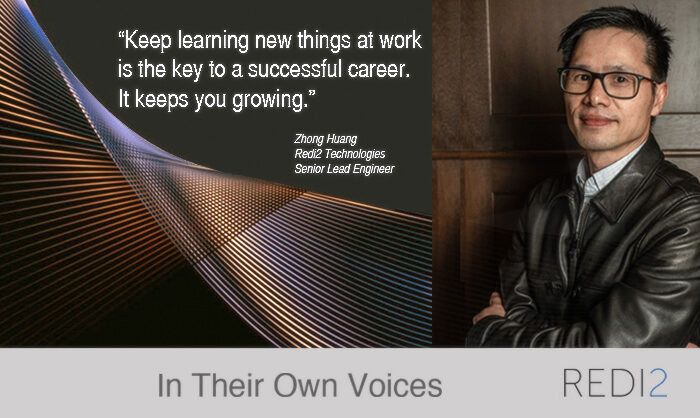 In Their Voices: Zhong Huang

Zhong Huang, a Senior Lead Engineer, has worked at Redi2 for more than six years. During that time, he has been part of the continuous evolution of the BillFin product, which serves financial advisors. Most recently, he helped lead the team that finished the BillFin eDocs feature and delivered it to production. eDocs is a highly anticipated invoice delivery feature that will make billing life easier for BillFin clients.

Making work lives easier is one of the overriding themes in Zhong’s goals as a software developer and is a major source of the satisfaction he derives from his work. To achieve his goals, Zhong focuses on communication—between team members, clients, and computers.

Zhong considers communication to be one of the most important skills leading to his career success; and he works to perfect it whenever he can, continually learning new computer skills and perfecting his language skills so he can meaningfully communicate with team members and fully understand client needs.

“I think of my role as an interpreter between people and computers,” he said.

A fulfilling career in the making

After graduating from Northeastern, he worked for a time in China in the field of web application development. As his parents live in the United States, he cared about what was happening inside American. By reading the news regularly over the internet, Zhong caught a glimpse of the information technology boom that was happening, and he saw the potential it presented.

Zhong migrated to the United States and finished his Master of Science, Computer Science degree at the University of Massachusetts Lowell in 2007. The move was challenging. Zhong speaks Cantonese and Mandarin, but his English was limited to “Chinglish,” a blend of Chinese and English. He tackled the language-barrier using the same approach he does with his career—always seeking to improve—and has achieved full professional proficiency in English.

At Redi2, as well as at other companies, mentoring has been an important part of Zhong’s growth. “I have been lucky to be able to work with different great engineers in different periods of my career. They have shared their experience with me selflessly and that helped me a lot. Learning and mentoring had a positive impact at every step of my career,” he said.

Now, Zhong embraces the role of mentor, himself. “I follow the example of my past mentors, openly sharing my knowledge. Sharing your knowledge with another is a way of teaching yourself, too,” he said.

Sathiya Manickam, who works as a software quality assurance engineer at Redi2, has worked with Zhong for nearly four years. “It’s essential that the developer and QA relationship should be friendly and robust and, with that note, Zhong is so friendly and a go-to person for any clarifications/suggestions anytime. He is an ‘easy-going’ personality who accepts criticism with a smile. I’m very happy and glad to work with him,” she said.

Communication is also key to the evolving future of technology

Immigrating from Asia with little knowledge of English was certainly a challenge for Zhong, but that experience helped him focus on communication as a central aspect of his career. As an interpreter between computers and people, Zhong views his role as successfully translating what people want accomplished from technology and then creating nuanced solutions. “I’m constantly reminding myself to do it better,” he said.

In his vision of the future, his mission is becoming more complicated and getting easier at the same time. “Technology is evolving hourly. People want more so the applications become more complicated, but the background process is more developer friendly,” he said.

This gives developers the opportunity to focus more deeply on communication. “You can focus on the users’ requirements much more as compared to the past. I believe this change will continue in the future and, in that way, technology will be smarter,” he said.

While Zhong is highly focused on his career, he enjoys activities outside work. His family lives in the suburbs of Boston where they experience the beauty of the countryside by hiking and biking.

He also regularly challenges his 10-year-old son to chess matches and still holds the edge on him, at least for now. Zhong doesn’t know what career his son will chose, but for the moment his son is focused on gaining the upper hand in chess and, perhaps, becoming a chess master—or at least regularly beating his father.

Must Read Blogs for Financial Advisors

The 6 Best Professional Associations for Advisors