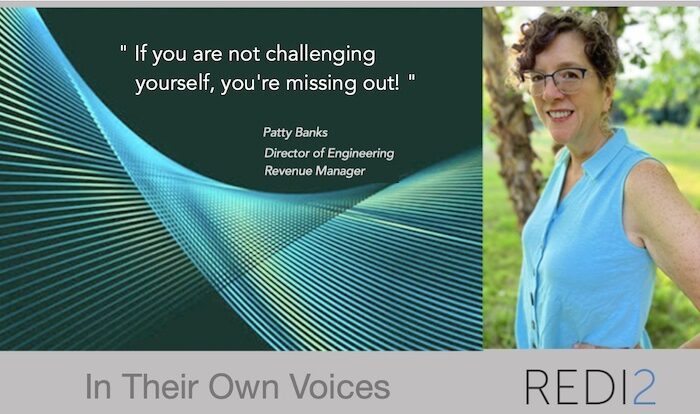 In Their Voices: Patty Banks

Patty Banks, Redi2’s Director of Engineering for Revenue Manager, has worked for the company since 2018, but she has worked with members of her team for much longer. For example, she was recruited by David Ritchie, her current boss, with whom she has a decades-long work relationship.

“Patty is a natural leader who has a deep understanding of not just technology, but her people, their talents and how to assist them in reaching their full potential. After two decades of working together at three companies, I would trust Patty to ensure our engineering organization delivers solutions that allow our customers to achieve maximum business value,” Dave said.

Ironically, throughout Patty’s life, she has ended up in leadership roles, but she didn’t recognize her natural talents for several years. “It took experience and exposure to different companies and people before I recognized those skills in myself,” she said.

Today, she relishes her role as a leader, and she aims to maximize the talents of everyone on her team. “I like building teams that are cohesive, and leading teams that have strong synergistic capabilities. Our product is complex, and right now we have just the right mix of brain power and industry knowledge between the product and development teams. We complement each other and there’s lots of excitement for what we are accomplishing for our clients,” she said.

While Patty had a clear college plan, she had few resources, so her college dreams were very big. At 18, straight out of high school, she decided to join the military to gain access to the GI Bill. That didn’t work. The military rejected her largely because of her age and gender.

Undeterred, Patty accepted fulltime employment as a secretary at Western Electric, where she talked her coworkers into helping her learn simple coding on the earliest computers. At 21, with the resources of the GI Bill still on her mind, she again approached the military. This time, she had age and her natural intelligence on her side—passing a qualifying test that led to an offer to enter any branch of the military she wanted and to choose her career path, as well.

Patty chose the Army and found herself listening to spies send Morse code from a base in Germany, which she still counts as one of the most interesting projects of her career. She spent four years on active duty in Germany and another four years in the Army reserves. She even found herself with a front-row seat to history, as she was still living in Berlin when the wall came down.

Her military career path also earned her the maximum match from the G.I. Bill, putting $20,000 additional dollars into her college fund. It was time for Patty to go to college.

An early Strong-Campbell Interest Inventory test indicated that computer programmer was one of her top three interests. At the time, Patty didn’t know what a programmer did, but during her delayed entry into college, she took a COBOL programming class and loved it. “It’s solving problems and helping people. It’s very logical and it was something new and challenging,” she said. Additionally, at age 42, her stay-at-home mother went to Sylvania Technical School and learned to repair computers, which also sparked Patty’s interest in this still emerging industry.

Unfortunately, the university didn’t immediately share Patty’s enthusiasm. Since she had been out of school for so many years, the college required additional math classes to prove that she could handle the requirements of the computer science field. Patty took the extra classes and went on to graduate at the top of her computer science class.

Patty has worked in computer science for 28 years, making her one of the first women in tech. While she didn’t have female mentors coming up through the ranks, she does make it her mission to be a mentor.

“A favorite part of my job is mentoring. To help people recognize their progress and their hard work and then to reward it. I really enjoy coaching someone who has a lot of potential,” she said.

Early in her technology career, she was faced with an unexpected challenge when she discovered that her male counterpart was making significantly more money despite their equal experience and her superior skills. The situation was likely a classic example of the gender pay gap, but Patty had a different take.

“I never thought, they are paying me less because I’m a girl. It was because they didn’t understand my value and I needed to fix that.” Patty went to see her boss. She fully explained her value and she explained how her compensation needed to reflect that value—she got her raise.

“I think a lot of women are afraid to speak up; but we have a voice, and we need to use it,” she said.

Despite her career satisfaction and the ultimate fulfillment of her college dream, Patty still finds challenges irresistible. “We are the culmination of our choices. If you are not challenging yourself, you’re missing out,” she said.

If she had a life do-over, she would tell herself to dream bigger and take more risks—maybe even add CEO to her resume. “If I had allowed myself to take more risks, I think I would have started my own company,” she said.

Patty loves her job, but she also strives for work-life balance, which she has achieved at Redi2. “I love animals. I love gardening, and I like cooking for family and friends,” she said. Patty lives outside Boston with her husband, 23-year-old son, 87-year-old father, and three senior dogs.

She volunteers at a dog rescue; two of her three dogs are fosters. The family also spends a lot of time hiking and biking in New Hampshire, where they have an RV at a seasonal campground.

The 6 Best Professional Associations for Advisors

In Their Voices: Patty Banks